No podcasts just yet. Check back weekly! 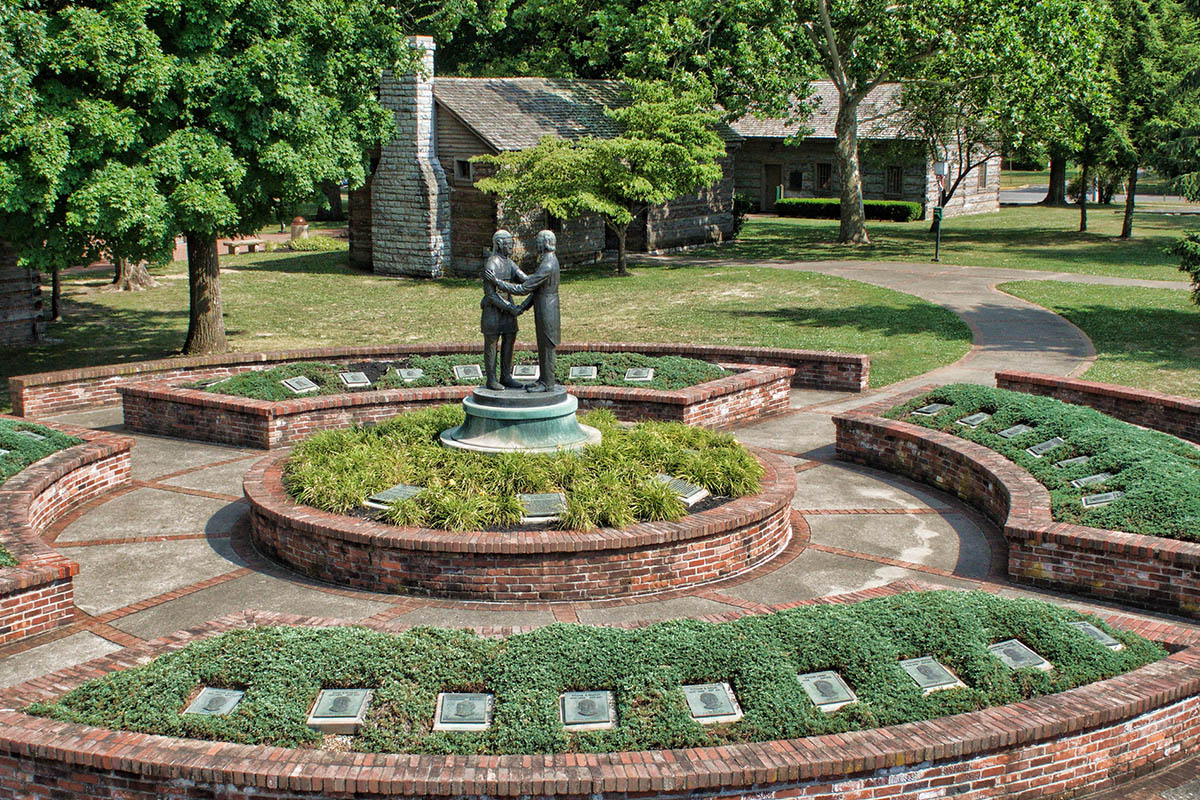 Founded in 1775, Danville was the capital of the Kentucky District of Virginia for several years and capital of the new state of Kentucky. The states constitution was being drafted in what’s now known as Constitution Square State Historic Site in the center of town. Log cabins in the square represent Kentucky’s path to state hood. A bronze statute with the slogan, ‘United We Stand, Divided We Fall’ is in the center of the square, which also includes the oldest post office west of the Alleghenies.

The square steps back to 1780 the every third weekend of September for the Historic Constitution Square Festival. Strolling musicians, hundreds of artists and craftspeople, fiddle contests and hands on activities from creating corn shuck dolls and brooms to baskets, pottery and candles set the tone for the celebration. Five districts are on the National Register of Historic places and Beaten Biscuit Row on Third Street, is named for a favorite culinary specialty.

Danville has ten historic homes are bed and breakfast inns. The Ephraim McDowell House and Apothecary, a national historic landmark, was the home of the 18th century famous physician. The 600 acre Perryville Battlefield State Historic Site, 10 miles west of Danville was the Confederacy’s last stand in Kentucky. Danville was the first Kentucky city to receive the National Trust for Historic Preservations Great American Main Street Award.

Centre College and the Community Arts Center are the linchpins of Danville’s thriving cultural and entertainment life. Established in 1819, Centre College is the best known of five higher-learning institutions around the city and Boyle County.

The first law school west of the Alleghenies, the 1100 student liberal arts college was the location of the 2000 vice presidential debate between Democratic Sen. Lieberman and Republican Cheney. Centre Colleges Northern Center for the Arts, where the debate was conducted, gives Danville a diverse mixture of arts and culture. Designed by a protege of Frank Lloyd Wright, the ultramodern center has featured internationally known artists.

The college’s grassy lawns are preferred stages for the annual Great American Brass Band Festival, which draws thousands of visitors and bands from around the world in mid-June. The Center’s indoor pool, gymnasium, library, walking tracks and other facilities are available to the public.

Other area colleges are the Danville campus of Eastern Kentucky University, Central Kentucky Technical College, the Danville extension of Midway College and the National College of Business and Technology. With about 850 students enrolled in traditional four year college programs and in continuing education and distance learning classes, EKU-Danville is the areas second largest college. Retirees can take classes at all the colleges.

Danville and Boyle County have abundant natural beauty. The landscape is marked by gently rolling hills, horse farms, and fertile fields. Winding, tree-lined roads are a magnet for retirees who enjoy hiking, biking and walking.

Lakes, rivers and streams also offer opportunities for sports and recreation. Herrington Lake, three miles from Danville is considered one of the states most rewarding fishing lakes. The lake has marinas, a golf course and some of the areas most high end residential areas.

Ephraim McDowell Regional Medical Center in downtown Danville is capable of meeting the health care needs of central and south central Kentucky. EMRMCS 125 staff physicians specialize in every major field. The complex has 177 patient beds. EMRMC’s new cancer care center is one of its most recent advancements. Along wit the cancer care center, the hospital has added open magnetic resonance imaging and introduced capsule endoscopy technology, in which a patient swallows a pill with a high-tech camera that allows doctors to see the entire lower intestine.

The estate tax or pickup tax is a tax on the estate equal to the amount by which the credit for state death taxes allowable under the federal estate tax law exceeds the Kentucky inheritance tax. Legislation was passed under the federal Economic Growth and Tax Reconciliation Act of 2001, which enacted a five year phase out of the estate tax for the commonwealth beginning with dates of death after Jan 1, 2005.

Most faiths are represented; the nearest synagogue is in Lexington.