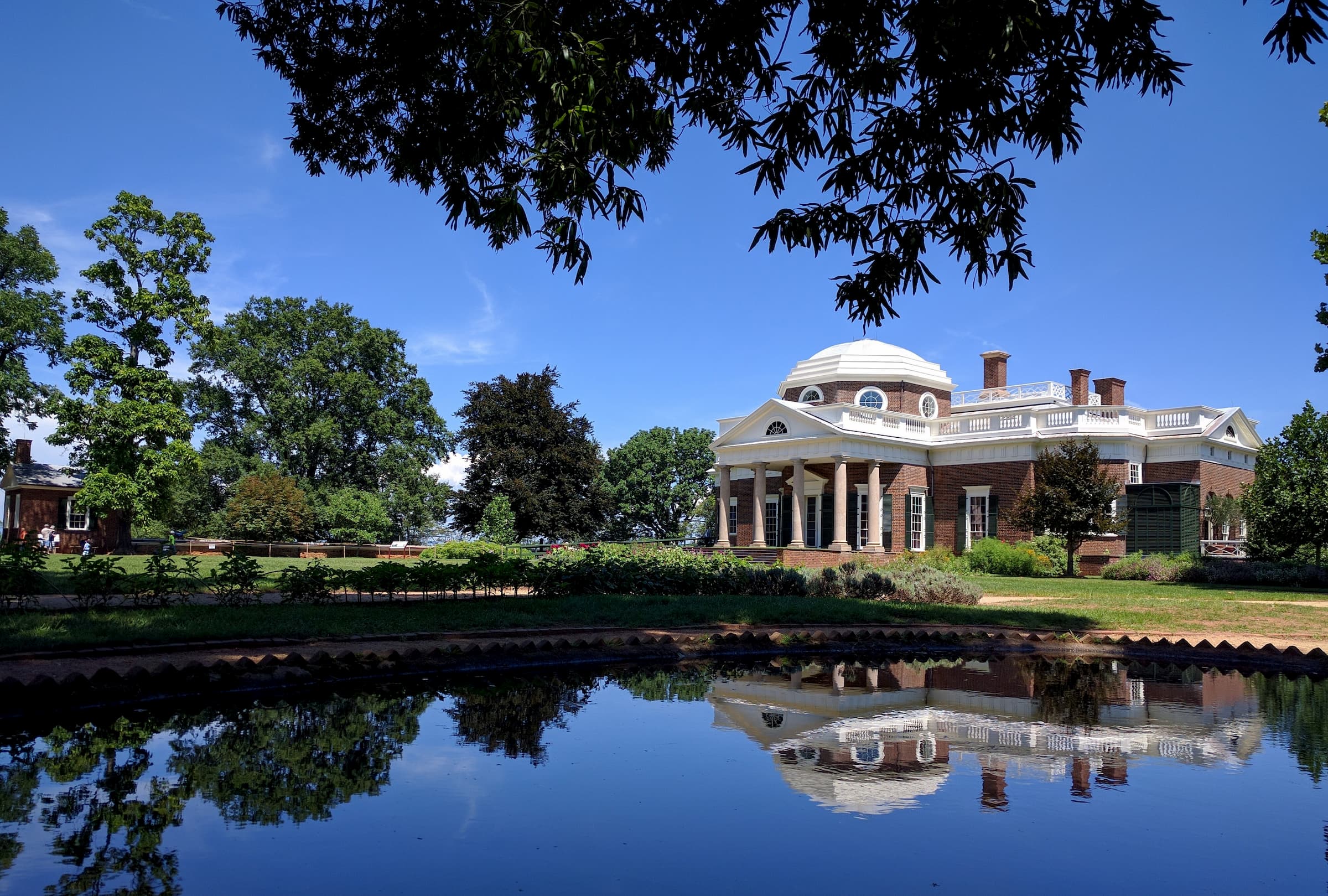 Join us on a Historic Walking Tour to learn about these men and women, the houses, storefronts, schools, places of worship, and public buildings in which they passed their lives, and view the cemeteries where they now rest.

Charlottesville, home to the University of Virginia, is a college town with a growing appeal to retirees fleeing the congested, high-priced suburbs of northern Virginia and the Northeast. Baby boomers from Washington, Philadelphia, New York and other big cities seem delighted to find this central Virginia combination of livability, affordability and sophistication.

The four-season climate in Charlottesville is inviting to many retirees. In one survey of weather professionals, the American Association of State Climatologists, Charlottesville rated behind only Asheville, NC, as having the “most desirable climate in the Eastern United States.”

Nearby are mountains to climb, slopes to explore, golf courses to conquer and lakes to fish. A good number retirees who relocate to Charlottesville say the presence of the University of Virginia was what first attracted them to the area. Retirees say the cultural activities, bookstores, sports and youthful sense of intellectual curiosity that accompany campus life are, for them, the most important aspects of a university town. For example, Charlottesville has more than twenty-two bookstores, and the University of Virginia has 14 libraries with more than 4.5 million volumes. UVa has an active drama department, and there are several community theater groups in the area.

The Medical Center has been rated one of the top 100 hospitals in the United States by BOA-Sachs, a health-care information research firm, and the Health Network, a health-oriented cable television network. It has specialty treatment centers for heart disease, cancer, digestive and neurological disorders and other health problems. Also in Charlottesville is Martha Jefferson Hospital, a well-regarded, 200-bed private hospital.

Having moved to a college town, many retirees find they develop a new interest in college sports, especially less-well-known sports. Football and men’s basketball are the big-time sports at UVA, and the Cavaliers – or Wahoos or ‘Hoos, – have had nationally ranked teams.

Retirees who want to stay active find a lot to do at the Senior Center, a nonprofit community organization open to anyone age 50 or over. The Senior Center, in its own modern building, has more than 90 groups and activities such as investment clubs, lecture series, arts and crafts groups, fitness classes and computer classes, according to executive director Peter Thompson. A travel program through the center offers day trips to Washington, DC, for $30 per guest: as well as other travel opportunities.

You will also find homes of presidents James Madison and James Monroe, both open to visitors. Several museums in the area focus the history of Virginia, and the Civil battlefields of Chancellorsville and Fredericksburg are within easy driving distance.

Charlottesville is not for those seeking a consistently warm climate, however. The area gets an average of about two feet of snow a year, and snow skiing is a winter sport at ‘Wintergreen and other ski areas in the mountains just to the west of Charlottesville. Summers can be warm, with temperatures hitting the 90s Humidity, while much higher than in dry ‘Western states, is lower in the Shenandoah Valley area than in roost of the rest of the East Coast except parts of New England. The growing season extends to 200 days or more, making it an ideal climate for gardening.

Although Charlottesville itself is in Virginia’s Piedmont Plateau at an elevation of just 480 feet, it is within shouting distance of some of the East’s most beautiful mountain scenery in the Shenandoah Valley and Blue Ridge Mountains.

Those relocating to Charlottesville have a variety of options for housing, from moderately priced downtown condos catering to retirees to gated golf communities to horse farms, going for a million dollars and up.

One drawback, or advantage, depending on your point of view, about Albemarle County is that a significant part of the land is tied up in large family owned farms and estates, some of several thousand acres. This keeps the area looking rural in the Jeffersonian gentleman farmer tradition, but it means that land is expensive. In Charlottesville, buildable lots can cost $110,000 to $160,000 or more. The Jefferson Highway area, for example, has been called the area’s Millionaire’s Row. This is fox hunt country, and working horse farms and estates line the road.

But the Charlottesville area has many middle-class communities as well. For example, Forest Lakes is a planned community of townhomes and single-family homes north of town, with prices starting at around $200.000. Land and housing generally are cheaper in surrounding counties including Fluvanna to the southeast and Greene to the north. Parts of both counties are less than a half-hour commute from Charlottesville.

On estates over $2 million, Virginia imposes a “pick-up tax” portion of the federal tax. The Virginia estate tax has been repealed for deaths after July 1, 2007.

The metropolitan area is to more than 200 churches and synagogues representing most religions denominations, including Buddy Greek Orthodox and Mennonite.

Retirees can take courses at the University of Virginia or at Pied Virginia Community College. Virginias Citizen Scholar Program allows residents age 60 and older who have lived in Virginia at least one year to audit credit courses or enroll in noncredit courses a space available basis, at no charge. Participants may attend any of Virginal gel institutions of higher learning, including Piedmont Virginia Community Code/ and the University of Virginia through Division of Continuing Education. Credit classes also are free for those with incomes of $15,000 or less; for others, tuition for credit courses at UVA is $242 per credit hour, but may very by class.

The University of Virginia Medical Center, a 552-bed regional acute-care research and teaching hospital, has been rated among the top hospitals in the Country Martha Jefferson is a private 200-bed acute-care hospital.